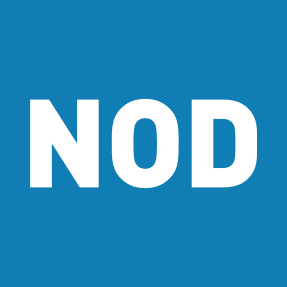 Washington, D.C. – (March 13, 2019) –The American Association of People with Disabilities (AAPD) has recognized National Organization on Disability (NOD) Chairman Tom Ridge, the first U.S. Secretary of Homeland Security and 43rd Governor of Pennsylvania, with the AAPD Leadership Award. Gov. Ridge was honored for his many years of distinguished service on behalf of the disability community, particularly his work with NOD to raise the issue of disability employment and to find opportunities for the 20 million Americans with disabilities who are ready to work. Last evening, AAPD President and CEO Helena Berger and Ted Kennedy, Jr. presented Gov. Ridge with the award at AAPD’s annual gala, which provides an opportunity for partners and supporters, as well as business and government leaders, to convene to show their support of disability rights and inclusion for all Americans with disabilities. 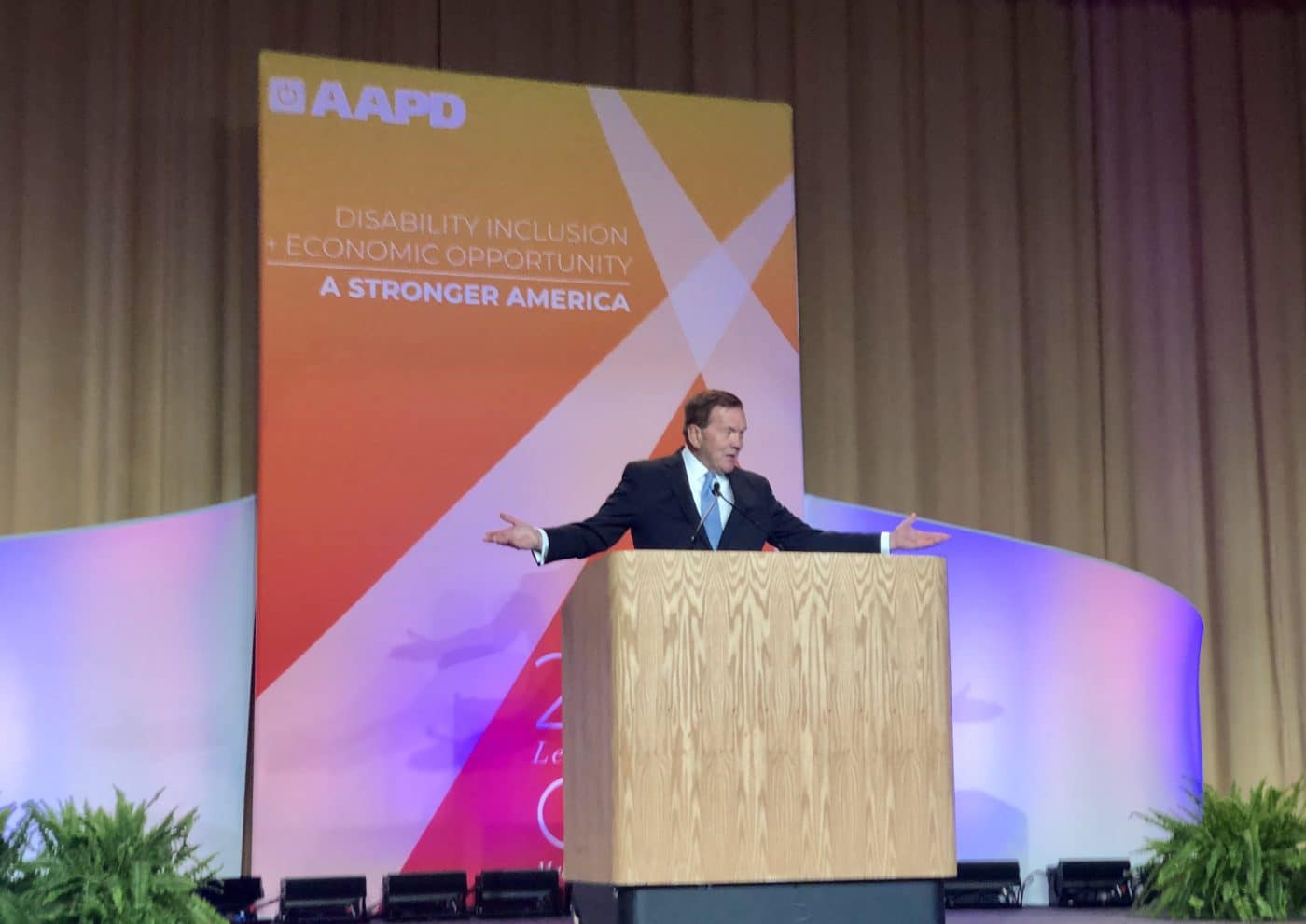 “We are honored to present Governor Ridge with the AAPD Leadership Award,” said Helena Berger, President & CEO of the American Association of People with Disabilities. “AAPD is recognizing him for his tireless advocacy and outstanding leadership in advancing employment opportunities for all Americans with disabilities.  We know that disability inclusion only enhances our nation’s economy and workplaces, so thank you Governor Ridge for all you have done to show how people with disabilities strengthen our workforce, communities, and country.”

Gov. Ridge became the NOD Chairman soon after his appointment by President George W. Bush as Homeland Security Advisor in 2006. Under his leadership as U.S. Secretary of the Department of Homeland Security, DHS implemented an impactful program to hire people with disabilities. He also partnered with NOD’s Emergency Preparedness Initiative for the first-ever conference on Emergency Preparedness for Individuals with Disabilities. For more than a decade as NOD Chairman, the organization has adopted a strategic focus on training corporations and organizations to help hire people with disabilities in our country today.

Most recently, Governor Ridge led the charge to launch Look Closer, a national awareness campaign by NOD to encourage hiring managers to consider this diverse, capable, and largely untapped talent pool and put more Americans with disabilities to work. He also has convened a group of fifteen disability organizations from across the country, including AAPD, to focus attention on the critical issue of employment for people with disabilities.

“In accepting the AAPD Leadership Award, I stand before you to represent not only the National Organization on Disability, but also the 57 million people with disabilities in America, their family and their friends,” said Gov. Ridge. “I accept this award for all people who value humanness, fairness and democracy.

“NOD and AAPD are very close in age. For the longest time ours were the only two cross-disability organizations, and we have toiled away at our work now for nearly four decades. So we know that the ADA, its precursors, and laws that followed, have done much to change that view of disability as something to be cured.  Or feared.  Or used as a reason to exclude people from communities, from civic life and from the workforce. And in many ways our circumstances have improved. 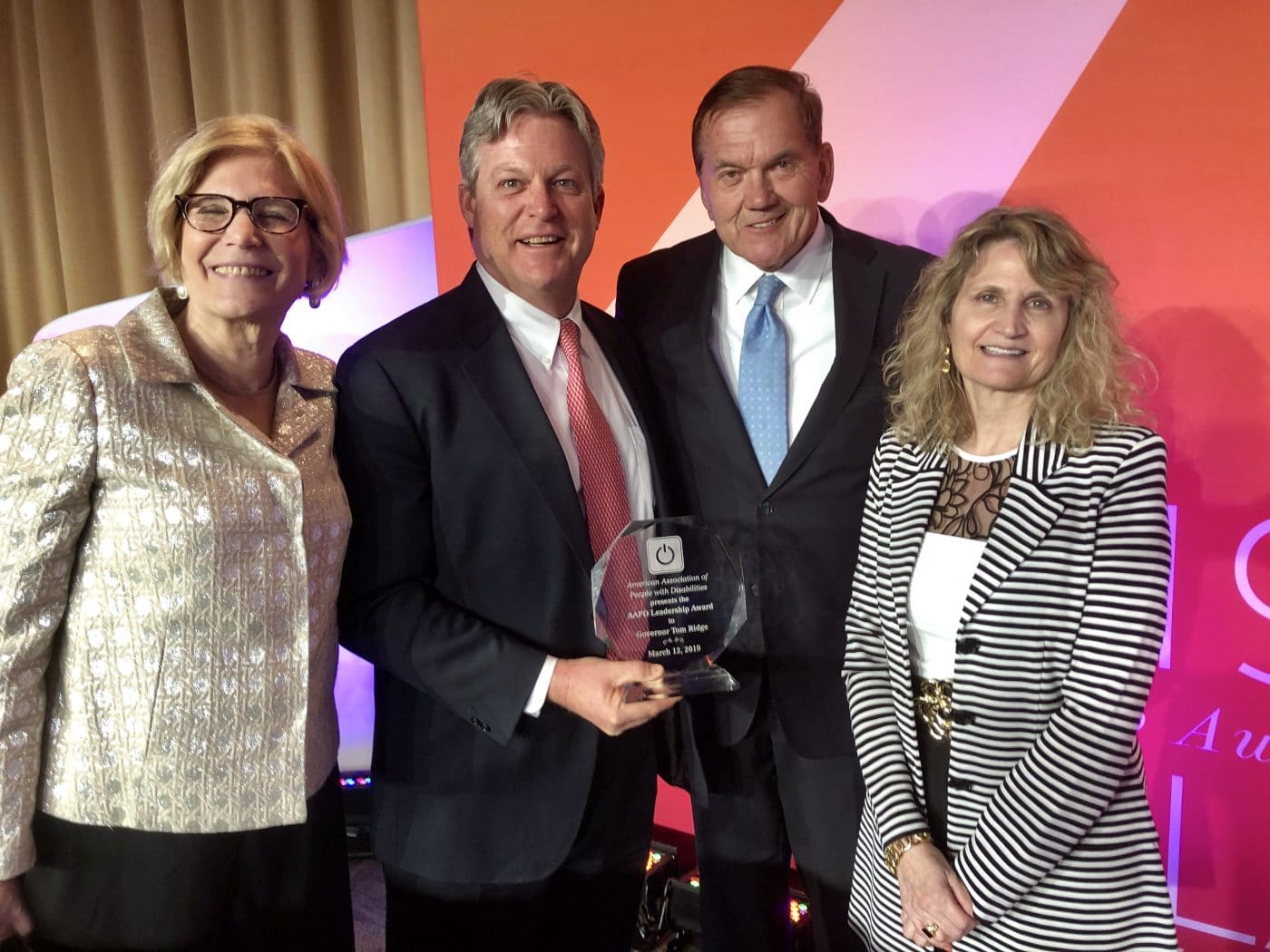 “But make no mistake. The numbers on workforce participation have not changed appreciably since the end of WW II.  Not in the 28 years since the ADA; not in this age where technology has leveled the playing field for all of us. Not even now, in the tightest labor market in half a century.

“There is, however, a good news side to this story. In an era where rancor dominates the mood everywhere and especially in Washington, our issue cuts across party lines. It cuts across race lines, gender lines, and even class lines.  The issues of who participates in our workforce, our communities, and our society, are not partisan issues.  In an era of identity politics, our identity is the most cross cutting there is. At the end of the day, that’s power.

“The collective voice of the disability community is one that can no longer be ignored, especially if we stay together. Put aside our individual differences, pick the few issues we agree on, and join forces.”

In April and October 2018, NOD convened these disability organizations in a “Disability Employment Roundtable.” The coalition collectively identified two policy priorities to work on together: (1) eliminating “14C” certificates, which allow employers to pay workers with disabilities sub-minimum wage; and (2) to bear down on enforcing the 503-rule change for federal contractors. The groups met earlier this month in Washington to brief elected officials at the U.S. Capitol.